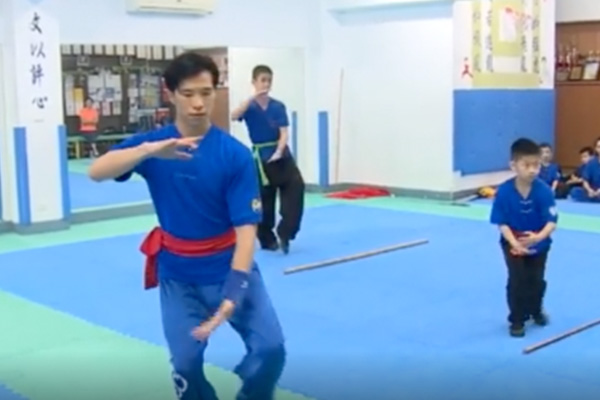 Lin Zhijie, curator of Xinwumen Kung Fu College in Taiwan, participated in NTD Television’s inaugural International Chinese Traditional Martial Arts Competition in 2008. He believes that traditional martial arts are all encompassing, and no matter how you learn them, you will never be able to learn them all.

The footsteps are steady and the force is ample. Lin Zhijie demonstrates the Jinying (Golden Eagle) fist, which is from the Nan Quan (Southern Fist) style, for the audience.

“I really like Golden Eagle Fist. Although its sequence of movements is not very complicated–it won’t be very complicated, it is simple. But amid the simplicity, the offensive and defensive awareness is very intense.”

“Like this capture grasp, I think that with Eagle claw you can practice how to grab and lock. I think this movement is actually very useful in many self-defense actions.”

Leading the children to rehearse the martial arts sequences they will demonstrate, Lin Zhijie himself began practicing traditional martial arts at the age of eight. He is now curator of the Kung Fu College, and martial arts have been his career for decades.

“The true value of martial arts lies in the cultivation of one’s moral character. Therefore, the education model I am now implementing in the college has martial arts etiquette and modesty. What we learn is of a higher level, so we should be even more polite and modest.”

In 2008, he participated in the preliminaries of NTD Television’s International Chinese Martial Arts Competition in the Asia-Pacific region, and won three championships in the Northern Fist, the Southern Fist and the Long Weapons categories. During the finals in the United States, he won the silver medal in the Male Weapons division.

Lin Zhijie said much careful attention was put into NTD’s International Chinese Martial Arts Competition, and during the competition practically everyone present fell silent to watch the sequences of the contestants on the floor. This left him with a deep impression.

“You felt that many people were paying close attention to the tournament, so as a contestant you felt that, wow, it is a very honorable thing, and it makes you feel good. It was a very happy feeling.”

“Hello everyone, I am Lin Zhijie from Xinwumen. I sincerely welcome everyone’s participation in the International Chinese Martial Arts Competition hosted by NTD Television. I also offer my best wishes for a successful competition and hope that everyone can come and meet fellow martial artists and pass these martial arts on to the next generation together.”